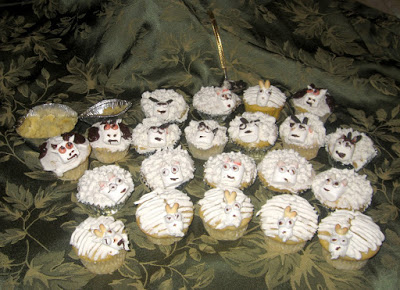 It’s a week after school let out and I realized in all the excitement I didn’t post anything online. So I will hit the highlights of an awesome end of school year. Things really came together in a big way.

Monday June 11
The General Studies teacher, a parent, an aide and I took the kids to Corning Museum of Glass. Mrs. S. is an awesome teacher. Back in January, the kids wrote her persuasive letters about what they would like changed in the classroom. One student wanted to go on a field trip. She helped the class organize an ice cream sale and they raised over $100. They then took a series of votes narrowing the field trip down to a realistic option of Corning – the students get in free and the adults are chaperones. Each student got to make one glass project and we had a docent that gave us a free tour for an hour.

The kids were great. They asked a million questions and were as equally enthusiastic at the museum as in the classroom. There is one part of the museum that was devoted to the history of glass. There is a large map next to each time period section. Somehow, as the docent was talking the kids were studying the map more than the glass. “Mrs. H… do you see France was called Gaul!!!!” Look here’s Rome!” The gedolim unit has made them very aware about the change in Europe.

We drove straight home from the museum. The one downer – I forgot benchers and water. Thank G-d for Ipods.

Tuesday June 12
We finished Vayeitzei. We did an inner/outer review

If the class has an odd partner, I am the partner. This gives me a chance to test a number of students.

Wednesday June 13
Our last test of the year! After the test we had our major nightmare. The students went to their portfolios to compile all of their linear translation sheets. I forgot I was dealing with third graders. Papers went flying everywhere. After some stress, I managed to help all the students compile their work in easily referenced packets.

Each student was assigned one perek for which they would create a summer review packet. The class brainstormed what should be in the packet and how students should review over the summer. Man, were they strict. They said students needed to read and translate from a chumash for 10 minutes a day, complete a perek a week minimum, complete one section of the review packet daily, and try not to ask an adult for help.

Each student was responsible for writing a summary of the perek, including events, characters and location, 5-10 על מי נאמר, מי אמר למי, fill in the blank, riddles and minimum of 15 level 2 and up שרשים and עבר הווה עתיד questions.


The class also cleaned out their binders and began to take some of their things home.


After davening, we went on our siyum trip. The sky was a gorgeous blue and the weather could not have been better for a trop to Springdale Farms.

After learning all about Yaakov and his sheep and goats, what could be better than seeing live sheep and goats, donkeys and horses  during the spring. The farm is run as a day hab for developmentally disable adults who work there. It is free with a small fee for a petting zoo. We started the day by touring the farm. We were introduced to spotted!! and speckled! goats. We saw brown! sheep, a black sheep with a white mother, a black goat with a brown mother and other combinations mentioned in the chumash. We saw a pig with his hooves stretched out proclaiming that he was kosher. We saw turkeys and chickens with their four toes.  We went to a barn where the students got to feed the goats. We saw sheared sheep.

Then we went to the petting zoo. There were the cutest kid goats and their mothers. Our kids got to climb this three level hay structure with the kids. They held them and petted them. They got to play with sheep.

After the kids and kids got tired of each other, we went to the pond where the students caught frogs. Did I mention that my class is 3/4 boys? The frogs were in the process of changing from tadpoles so it was cool to catch frogs with tails, without tails, on the ground and in the water. Luckily, we convinced the kids that they couldn’t bring the frogs home. The pond was also filled with fish and waater fowl. We even  found a goose egg hiding in the grass next to the pond.

We then went on a nature trail in the woods nearby. The general studies teacher came and the students saw decomposers and a years worth of science come to life.

After the hike, and hearing a few growling stomaches, we headed to the lunch pavilion. Of course, our class found a garter snake in the grass – if you are counting, that means they saw mammals, reptiles, amphibians, birds, insects, and fish in one day.

To cap off the day, I made my sheep cupcakes using big and small marshmallows. We got back to school in time for the afternoon class.


Friday June 15
In the morning, the class worked on writing their end of year packet. After the students finished their summary, they put their name on the board and I checked over their work.

We then learned the parshas Shelach. Parsha Cakes shelach

Monday June 18
The students finished writing their review packets. They also worked on their chayenu, we reviewed vocabulary words to earn extra dollars and read the last few stories in our ivrit book. They packed up their chayenu and ivrit books to bring home

Tuesday 19
The last day of school. We started the day by davening to themselves. I explained to the class how during the summer I wouldn’t be there to tell them to daven. We practiced staying focused on the words by davening the whole tefilla to themselves.

We then learned Parshas Korach followed by the big faculty/student game of machanayim (girls) or baseball (boys) When we got back, it was time to pack up. I had my final store and final raffle. I gave out the review booklets. To end off the year, we said the first perek of tehillim together which talks about the results of good choices.